Free Shipping on orders of $50 or more!

Validating Your Email Address...
Oops, there seems to be an error, please re-enter your email address.
Thank you! Your discount has been applied.
Tap Here to get Free Shipping on orders of $50 or more!

Thank You! You shall hear from us soon !!

An easy perennial with big potential 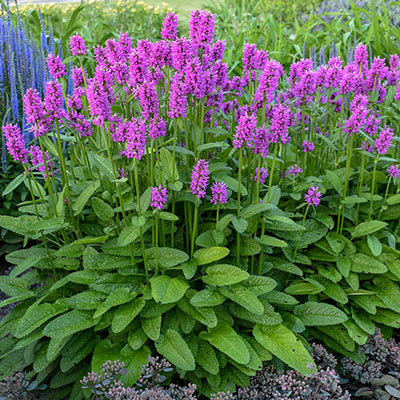 Opens a dialog Tap on image to zoom.

An easy perennial with big potential

We ship this item in Spring.

Sure, betony isn't very well known in the home garden yet, but we think Hummelo can change that. It was the superstar of the Plant Evaluation Trials at the Chicago Botanical Garden. Out of the 22 top varieties of betony they tested, Hummelo received the highest rating. Why? It is unmatched for performance. It's low maintenance and so easy to grow. Bright, feathery blooms hover over a perfectly dense mound. The colors are highly saturated and go with just about anything. And you can grow it just about any way you want. It thrives in acidic, clay, loamy and sandy soils. Feature it in sunny borders, naturalize it around a woodland garden, edge a walkway with Hummelo to draw attention to it, get a good look at its flowers in a patio pot, brighten up your cut flower bouquets…or if you just can't get enough of this betony, turn it into a dense, carefree perennial ground cover. In a warm climate, it may even be an evergreen ground cover. You'll be pleased with how easy Hummelo makes your gardening, and pollinators will be thankful for the treat. It won't draw attention of rabbits and deer, though, they tend not to eat betony. Stachys monieri 'Hummelo'

When will my order ship?

Plants will be shipped at the proper planting time for your area of the country during the shipping timeframes outlined below:

We have received your request. You will be notified when this product is in stock.